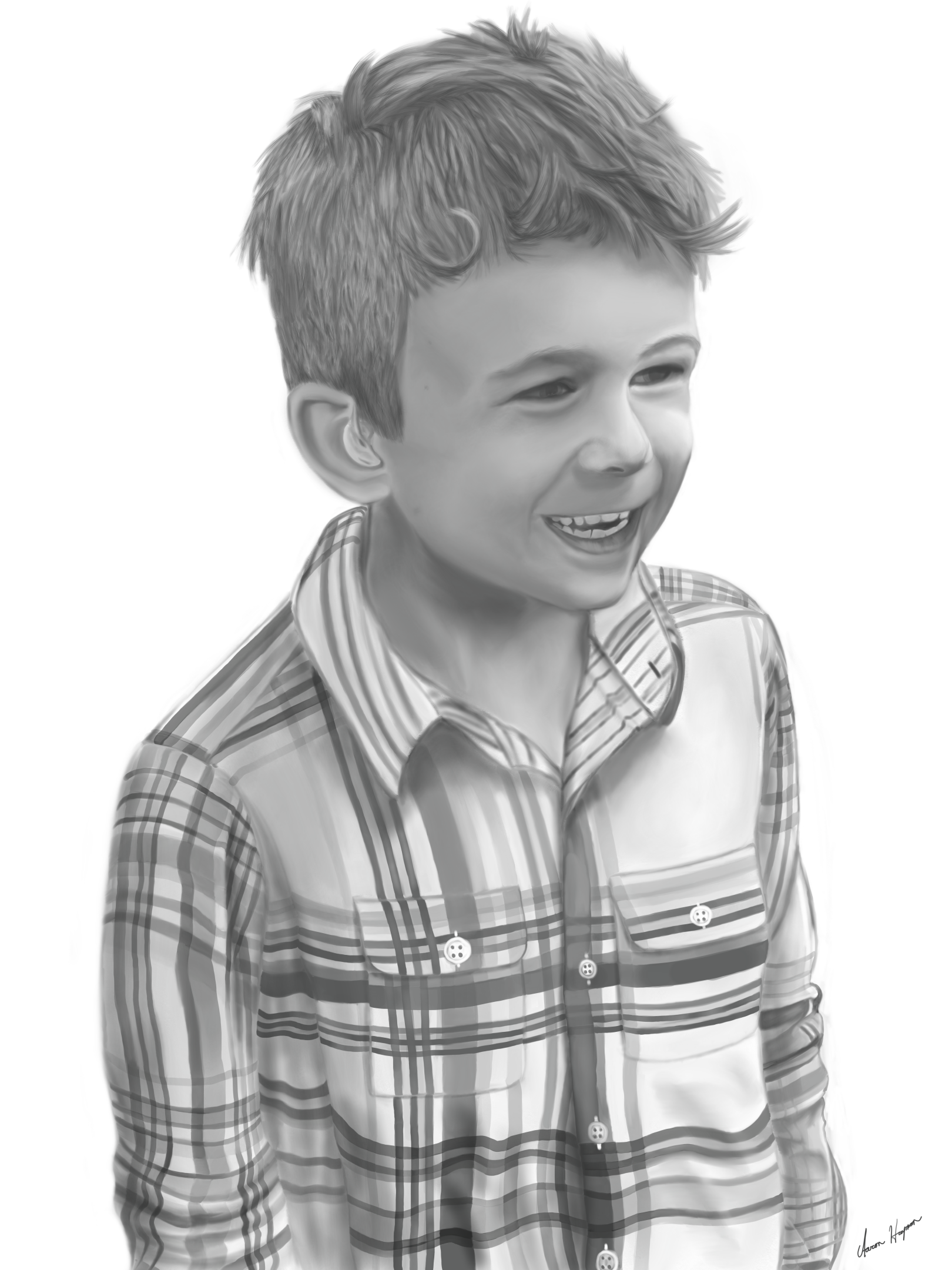 I almost called this one “I hate plaid.” I chose the reference photo because of his smile, which is very ‘him.’ I didn’t even think about the shirt. Nolan’s shirt was basically a black blob, so it was easy, but I’d done Fiona’s shirt before and that one had a bit of detail.

Well, the rest came out pretty well, I think.

I almost didn’t do it. I knew it was going to be a lot of work, which made me doubt whether I should (no one would know). But it was also something I’d not done before and the challenge enticed me. If I knew what a pain it would be, I might not have done it.

I did first what I normally do: rough sketch; don’t worry about accuracy; just get the outline in; then refine later.

First off, it’s hard to sketch multiple parallel, wavy lines. Ugh. At some point after erasing for the hundredth time, I got frustrated and just drew the damn thing; I’ll refine them later.

Refining, though, turned out to be even harder. For one, there’s two techniques for drawing a line:

In either technique, refining is a pain. Solid strokes have to have their color evened out and their edges smoothed. Even then, the spacing where the lines diverge from parallel is really hard to correct. It’s hard to shift a line like this in refinement. Also, the overall color shifts are hard to correct. Consider: each crossing is a different color. If one line is incorrect over the crossing of a dozen small perpendicular lines, you’ve got over a dozen little boxes to correct, each with their own color correction.

Small quick strokes create half circles at the ends of each stroke. Those things are anathema. Plaid has square edges, not circles. So I spent an absurd amount of time smoothing those out while not ruining the plaid squares. I ended up creating my own brush, a square one, I could use to get into the edges. And because the brush was square, I had to angle the pencil perfectly to align the brush. It took a week for my back to recover.

The end result is okay, I guess, if you don’t look at it closely. The front of the shirt is the best. It seems to follow the curves of the shirt well. The arms… not so much. I’d redo them except I don’t think my back could take it.

Next time I do plaid I intend to:

Overall, I’m pleased. It does look good, and I think I’m steadily improving, which is a big part of the point. I learned new techniques and produced a sketch of my son that I can be proud of.