A Magician's Guide to Defensive Baking 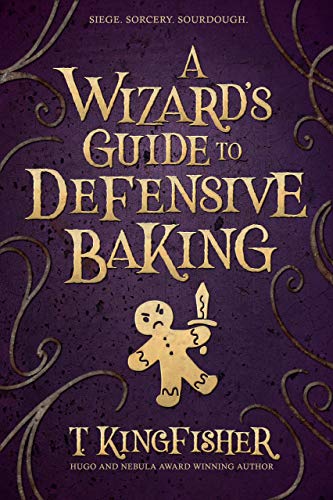 So I picked this one up off a Kindle recommendation. It was fantasy, it looked entertaining, it had a ton of good reviews, and it was on sale for a dollar. It wasn’t even an impulse buy— my impulse to purchase it arrived after I’d pressed the button. It was also going to be a quick read, so I didn’t feel like I needed to finish any of my other books before starting this one, a nice interlude before I return to whatever ongoing epic fantasy I’m currently consuming.

A Magician’s Guide to Defensive Baking (henceforth referred to as Defensive Baking for the sake of sanity) is a Story, capital S. In the fantasy/sci-fi world, writers will often try to bring a strong sense of realism to their worlds. They are, after all, already assuming an unrealistic premise of magic and/or technology that might as well be magic. But there’s also a segment of authors that lean in to the unrealistic, practically turning their story into it’s own metaphor.

Defensive Baking is one of those books. It leans in toward the ridiculous, humorous, and the fantastical. It reads more like a fairy tale and a delightful one at that. It was a thoroughly enjoyable book, easy to read, and inviting to pick up. Kind of like a warm chocolate cookie, I found myself enjoying the simple process of reading a good simple story.

It’s telling that I did not realize this until after I’d finished the book.

I probably should have. About halfway through the book, the behavior of the adults, specifically one of the rulers of the city, started to feel off, perhaps even a little childish. Without the context of actually knowing this was a children’s book (albeit, for older children) my mental model shifted from “fantasy” book to “fairy tale” book.

I didn’t mind. Already, I’d come across some ridiculous, but entertaining scenes. The book was entertaining enough that I shrugged and wrote it off as necessary to the plot mechanics. Perhaps there was a way to make a more realistic plot, but I’m not sure it could be done and keep it as short and entertaining as it was.

And so instead of realizing it was a children’s book, I attributed to the author a certain amount of cleverness and craft.

The book starts with a murdered dead girl lying in the bakery. I would put in a spoiler warning but it’s literally the first sentence. In fact, we know this long before we learn our protagonist’s name, or age, or sex.

In other words, it’s a hook, and an excellent one at that.

The author immediately pulls back, of course, introducing us to the bakery and what our protagonist does there in a rambling first-person tone, then moves on to the actual process of getting around the body. We don’t learn her name til the end of the chapter; I don’t recall when we learned her age. But the intro takes all of a chapter and most of it is explanation (tell, not show), yet it’s also quite succinct and, once out of the way, we’re quickly ushered into the story’s events.

The hook is a common but important technique that is often ignored by fantasy authors, including me. A big part of the reasoning for this is simple: most fantasy worlds need a lead in; they’ve got a learning curve. Putting the reader directly in the action could easily end up confusing the reader more than hooking them, especially if the scene depends on a base knowledge of the world.

So the author introduces the world slowly, letting you learn of the world and grow comfortable with the characters. There may be (and probably should be) some hints of whats to come, some tension built, some minor events to reveal characters and grow attached to them, but often the opening event occurs several chapters into the book. The author is, in effect, banking on the reader’s trust.

My book currently takes five chapters to get to any real hook. That’s a whole lot to ask of the reader, especially from a debuting author. The chapters aren’t bad and those who’ve read it even tell me they’re entertaining, but is it enough? Do I need a hook?

I don’t know, but I’m giving a lot of thought to rearranging my first chapters. I’m already using flashbacks, and several of the opening chapters could be folded into those. But it’ll also require I rewrite some of those chapter and compress the “tutorial”. This may not be a bad idea but it’ll take a lot of thought.

I’m worried a little that I’ll set unrealistic expectations. I do spend time with the characters, building tension slowly instead of driving the character from scene to scene; I’m not writing a suspense or thriller; this is a fantasy epic. Or is that just an excuse? I’m not sure… and yet I can’t help but think that it’s worth a try.

A lot with a little progression

Power progression books are very popular. It’s satisfying to see the underdog work hard and overcome impossible odds. This can come about is a whole lot of ways as the protagonist gathers magic, skills, tech, or even just experience points. However it’s done, readers find it satisfying to watch a character grow and overcome. We identify with the main character; it’s wish fulfilment, escapism. It sells.

Defensive Baking is one of the best kinds of power progression. It does, for the most part, do away with any “candied badassery” 3 and replaces it with knowledge progression combined with the engineering dilemmas in magic form. And even when the author does ramp up the visual effects, it veers more into the fantastical and even comedic.

In retrospect, the protagonist isn’t anymore or less powerful than she started out. She just grew as a person and learned more about herself and the power she always had. That is, in my opinion, one of the most compelling kinds of power progression.

The story is a classic hero’s journey, condensed. All the elements are there: leaving home, discovering oneself, coming home as something more, and using what you’ve gained to save your home.

All I can really say is they were all well done. There’s nothing revolutionary here, or even innovative. The author executed it flawlessly and injected a dose of the fantastical and comedic. It’s a reminder that you don’t need to reinvent things to make a good story.