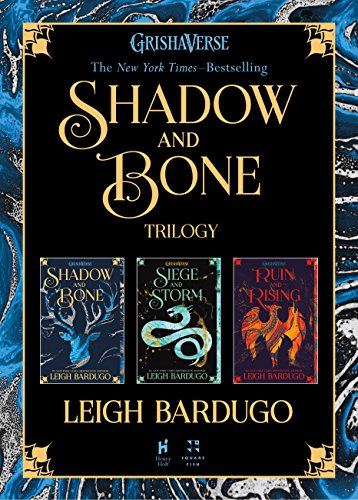 This book— oops sorry, these books are well written.

Actually, let’s start there first: in my head, they’re a single book. This is, perhaps, an artifact of buying an entire trilogy packaged into a single Kindle Edition racking up a page count equivalent to many epic installments. So while I speak of this work as a single piece, it might help to realize my view is a little skewed. Were there cliffhangers? I’m not sure. If there were, I didn’t really notice as I simply turned the page.

I picked up the book after watching a Netflix trailer for a cool looking new fantasy series with the same title. A few minutes later, I’d downloaded the trilogy 1. My general assumption is a series must be at least somewhat good if people are willing to throw millions into turning it into a TV/Movie series.

And it was. Good, that is. I’m sure a lot of people really liked it and I can see why Netflix took it up. It just… wasn’t great. But that’s not necessarily a bad thing.

I would be thrilled to produce something this good. It’s hard to make something good, as can be attested by the flood of mediocrity saturating ebook stores today 2. Making something great is even harder (of course) and risky. To make something great, the author generally has to break the established rules and patterns that make for good books, and do it in such a way that it doesn’t ruin the whole thing.

And this is how a lot of great authors fall flat on their face.

Leigh Bardugo does not fall on her face. The whole series is well written with a good plot, interesting characters, and a magic system in a world that was… well, a little flat, to be honest, but it was a good story at least.

It was also very predictable. By the end of the first chapter I’d predicted the end of the book, and correctly. To be fair, there were a few times I thought Bardugo was going to buck the standard and do something different but no, she didn’t, and I admit to some disappointment at that. That being said, I rather suspect something different would have alienated much of her readership— this is a specific type of story, and readers want that ending where [spoilers].

But I have to reiterate: it was a good story. I can’t recall a point where I wanted to skim the pages. I was interested in what was happening, even if I knew where it would lead.

It’s called the “Small Science” in the book and I have to agree: the magic system is very small. Magic users are called gisha, and they’re slotted into only a few categories: healers, heart-renders (anti-healing), inferno (fire), squallers (wind), tidemakers (water), and finally a tinker class for making things (sorry, can’t remember the name). Then there’s the darkling who controls darkness and the sun summoner who controls light.

I think that’s it; it’s all I can remember at least.

There is a deeper magic that revolves around creation instead of manipulating energy, but there was precious little actual detail behind it and to me it came across as more of a plot device.

Actually, on second thought, the whole magic system really did feel more like a plot device than a living, breathing part of the world. That’s fine if it’s what the author intended. If the story itself was the point of this book and not delving into a deep, complicated magic system, then that goal was accomplished quite well.

The world was only barely more fleshed out than the magic. Despite the whole “save the world” motif running throughout the book, it all takes place in what feels like a very tiny part of said world. Even the nation of Revka, where the majority of the book takes place, felt small and almost claustrophobic to me. There seems to be only one or two cities combined with a smattering of small, forgettable towns. The politics are essentially non-existent. You’ve got a shallow and capricious king and queen, both of whom are mostly just figureheads behind the real power of the darkling. I think there are other royalty, but they come across a little more than bodies meant to fill ballrooms.

In a similar vein, religion was shallow. There are saints whom may or may not have been gisha (probably were), and people pray to them. Without spoilers, a new religion is born in the book, but it’s not any different than what I just described. And while it plays a somewhat large role in the plot, there was very little depth, where adherents do little more than mindless hero-worship and the only real leadership are little more than cynical, ambitious power mongers.

The other nations of the world — all three of them? — came across a little more than cardboard cutouts of ill-defined stereotypes. At one point, a native of one of the other nations responds to an offhand comment about her country with, (paraphrasing here) “There is more than sand in our nation.” I couldn’t help but think, “Are you sure?”

This lack of depth to the world undercuts the whole “save the world” imperative the author was attempting to drive home. The world was just too small to feel consequential in that way.

The character development is where the author truly shines. The main characters in the book feel real, with their own motivations and actions that don’t feel like they’re there to simply drive the plot. Relationships are fleshed out and interpersonal to an impressive degree. They’re complex and ever changing in the natural, messy way relationships tend to be.

This alone makes the world feel real. It draws you in and distracts you from the props that comprise so much of the rest of the book. The shallow magic system and the flat, constrained world don’t really matter. They’re not the point. The people are the point, and the author invites you to take part of their struggles. Forget everything else, people are what matter, and here is where the author nailed it.

There’s only one small problem, and I didn’t even realize it until the end: move just a little outside the protagonists circle, and the characters become quite flat. Yet so good was the central character development that you don’t quite realize this at first, and maybe not at all.

There’s a few scenes where one character visits another… in spirit? Not sure; doesn’t matter. In those scenes, everything but the two characters is fuzzy and nondescript. So long as they focused on each other, it didn’t matter. The fuzzy rest wasn’t the point. The book is like this. Everything within the bubble of the main character is so well thought out and feels so real, you don’t notice that everyone else isn’t.

This came to light when I realized that too many characters were too focused on the main character. She had become all the world in a sense, and while the relationships feel real, this fact that she’s become the center of everything most decidedly does not. There is a plot reason for this, but even that isn’t enough to justify it.

Once I realized that, I started looking more closely at the distant characters, the ones not central to the plot. Once again, I found cardboard cutouts.

Now, there’s only room for so much. Each of the book’s trilogies totalled maybe three hundred pages each. That’s not a lot of room to develop out other characters. But the author got really close to me not noticing this. Her slight of hand was really good. I think if she’d just hinted of more plot/relationships/stuff-happening outside of the realm of our main character, stuff interesting but not exactly related to her specifically, I probably would never have noticed.

Either way, character development in general is clearly a strength of hers. Just a little more effort into non-critical characters, and I can see her work becoming great pieces, at least so far as characters go.

I liked these books. They were good. I can’t say they were great, but I didn’t need them to be. I was entertained, I felt stuff, and even toward the end she may have pulled out a tear or two. These books will never be a favorite of mine, but I wouldn’t hesitate to recommend them.

As for the TV series? Well, all those cardboard cutouts? Those are great places for a show to elaborate. The sketches provided by the author could easily be filled in and made to feel real. I hope they do.