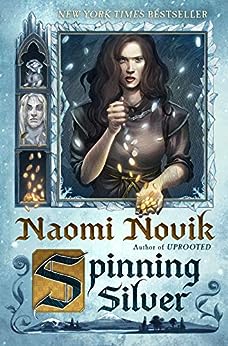 Okay, so having read “A Deadly Education”, I decided to finally go back and read “Spinning Silver”, a book I kept seeing recommended but never read because I just knew it was a stupid retelling of a story I already knew 1.

And I hate stupid retelling of stories I already know. I really do.

Except this was not that. Novik more takes the bones of the original story and rearranges them into something almost entirely different. Perhaps it would be better to say she took the original as a kind of inspiration, but there’s no doubt it is her own creation.

And here’s the thing: this was a great story. Really. I loved the story. It kept me reading as a story should.

But, oh my god did it do it in such a painfully laborious way.

Okay, let’s just get this out of the way cause it’s clearly on my mind. Naomi loves, and by ‘loves’ I mean she absolutely adores with unadulterated passion, endless segues into her character’s minds as they opine over their past in exquisite detail.

I currently have… well, not pages, but perhaps many paragraphs of exactly the same kind of thing, where I recite to the reader the character’s past so that they can understand them. I mean, I’ve spent who-knows-how-long coming up with their past and how can the reader expect to understand them if I don’t expound on how and what exactly brought them here and why they’re doing what they do and every little causality inherent in their decision process, and oh but look at how real my characters are!

Except, in the end, “Rachael looked at the farm with longing,” is exactly all that we, as the writer, need to use convey the longing the character is experiencing. Why not leave it to the reader’s imagination? Having learned about so-and-so for half the book, our readers can very easily understand why she would want a farm of her own. In fact, I would argue the reader’s imagination just— just— might be better than our own. More to the point, all this explaining distracts from the actual story, forcing the reader to either skim for the good parts, postpone the plot and possibly loose interest, or slog through the details with glazed eyes..

And I do not mean to imply that all such exposition is inexcusable. There are certainly times when a character’s past must be understood in order to grasp the current situation. But that situation is, I believe, quite a bit rarer than most authors might believe, and there’s a lot of other ways to expose the past without detailing it out in our character’s head.

Let’s move on to my second complaint.

I can’t quite say the same thing about her choice to use multiple first person perspectives. The problem with the first person is the narrator very rarely refers to themself. This isn’t a problem when there’s only one point of view, but multiple view points force the reader to divine the person speaking through context. You can’t just say “Joe woke up”; it’s always “I woke up”. Problem is, who is the ‘I’ speaking?

Dialog, location, and circumstances are natural places for the reader to look, but it can take time to figure those out. In meantime, the reader has potentially consumed paragraphs without actually knowing who’s doing the talking. In the case of Spinning Silver, more than once I read an entire section believing it was of one person, only to come across something later that made me realize I’d actually read a completely different character. They’d been travelling together, so almost all the clues were the same.

I am of the opinion that the best way to deal with this is to create a unique tone for each character by imbuing the character’s personality and emotional state into the narrative writing style. Done right, the reader will know who’s speaking almost immediately, sometimes without any context at all, merely by virtue of the words used. In other words, each character perspective should feel like it was written by a different author.

For instance, I’m writing a character 2 who’s very particular, somewhat neurotic about their clothes, and has an impeccable, almost unnatural sense of time and space. Nothing ever takes only a few seconds; nothing is ever close or far. That character would never admit to such vague terms. Instead, it took four seconds, and the door was eight paces away (and there were twelve boards between them and the door). No other character does this, so the moment we see “four seconds” instead of a “few seconds”, we know of whom we’re reading.

This is where I felt disappointed by “Spinning Silver”, for while I thought the story was great, I never truly connected to any of the characters even though I knew so many things about each of them. I even began to confuse them, mistaking one for the other until it almost didn’t matter who was who.

None of this is to say it was not a good story. The actual plot lines were very tight and well integrated. The story itself was interesting and managed to keep me engaged even through what seemed like an endless retelling of ruminations of recited backstories. And while the narrative perspective for each character all sounded the same, they still acted with their own, believable motivations. They really were different; it’s just their differences were painted over with the same tones.

A final thought: “Spinning Silver” was written several years before “A Deadly Education” and, having read them back to back, it’s very clear Novik has improved her writing considerably, especially when it comes to creating unique first-person tones. If you’ve read my review of “A Deadly Education”, then you will have noticed a theme: I still think she spends too much time in her character’s head reciting the past, but it’s a lot better than here and her improved master over tone goes a long way toward making those segues palatable.

In fact, I would say that while I’m clearly not a big fan of reciting a character’s past in their own head, the more entertaining the author can make those trips down memory lane, the less I seem to mind.

But would I recommend “Spinner Silver”? Yes, I would, just so long as you know what you’re getting into. Behind the bland tones is a story well worth reading.